Bad news from Apple and signs of slowing international and domestic growth sent stocks tumbling in Thursday trading on all of the major markets.

Investors erased some $75 billion in value from Apple alone… an amount known technically as a shit ton of money. But stocks were down broadly based on Apple’s news, with the Nasdaq falling 3 percent, or roughly 202.44 points, and the Dow Jones Industrial Average plummeting 660.02 points, or roughly 2.8 percent. 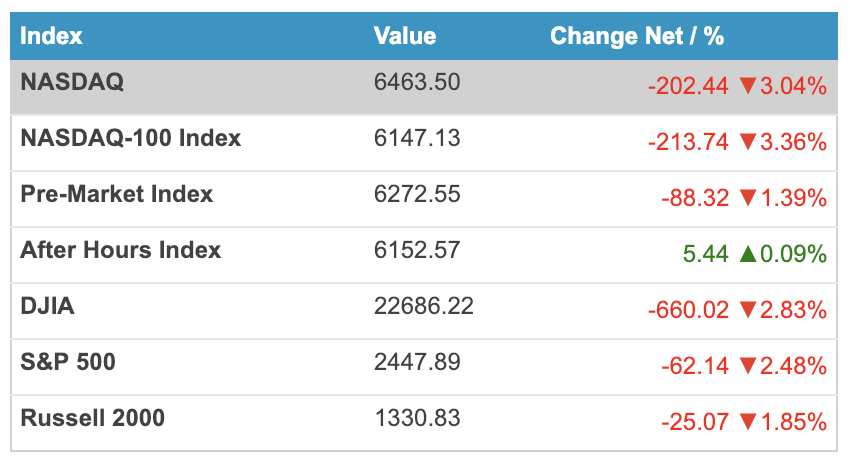 Apple’s news from late yesterday that it would miss its earnings estimates by several billion dollars thanks to a collapse of sales in China was the trigger for a broad sell-off that erased gains from the last trading sessions before the New Year (which saw the biggest one-day gain in stocks in recent history).

Apple’s China woes could be attributed to any number of factors, D.A. Davidson senior analyst Tom Forte said. The weakening Chinese economy, patriotic fervor from Chinese consumers or the increasingly solid options available from domestic manufacturers could all be factors.

Investors have more than just weakness from Apple to be concerned about. Chinese manufacturing flipped from growth to contraction in December and analysts in the region expect that the pain will continue through at least the first half of the year.

“We expect a much worse slowdown in the first half, followed by a more serious and aggressive government easing/stimulus centred on deregulating the property market in big cities, and then we might see stabilisation and even a small rebound later this year,” Ting Lu, chief China economist at Nomura in Hong Kong, wrote in a report quoted by the Financial Times.

U.S. manufacturing isn’t doing much better, according to an industrial gauge published by The Institute for Supply Management. The institute’s index dropped to its lowest point in two years.

“There’s just so much uncertainty going on everywhere that businesses are just pausing,” Timothy Fiore, chairman of ISM’s manufacturing survey committee, told Bloomberg. “No matter where you look, you’ve got chaos everywhere. Businesses can’t operate in an environment of chaos. It’s a warning shot that we need to resolve some of these issues.”

The index remains above the threshold of a serious contraction in American industry, but the 5.2-point drop from the previous month in the manufacturing survey is the largest since the financial crisis, and was only exceeded one other time — following the September 11, 2001 terror attacks on the U.S.